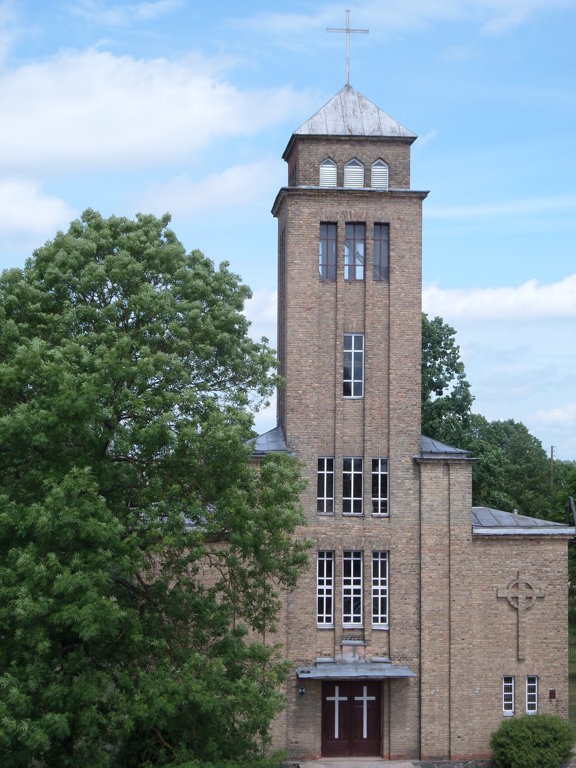 The church was built in 1940 after reduced Kaunas Christ Resurrection Church of the plan, in a modern style. Central altar, two side altars and pulpit made in 1809 in the Renaissance style carvings. Seen in the Church of the Blessed Virgin Mary, St. John, St. Peter and Paul's images and St. Ignatius image. Both the altar and statues are transferred from the Catholic Church in Rokiškis (Lithuania). The rest of Aknistes Catholic Church  stock- church-step confessional, have been preserved from the old church (built in 1774, demolished in 1985 ~).

The church has one tower, which the plant is 180 kg bell. The church is 28 meters long, 15 meters wide and 10 meters high brick building.
Opposite the existing church there is an old Catholic Church (1774), the place where the currently viewable wooden cross (located in the former site of the altar). The only remaining evidence of the former church is - a red brick church gates, which have become an urban Aknistes visual identity symbol.

Mass Times: Sundays 12:00 pm ( except second Sunday of  the month), priest A. Skadiņš 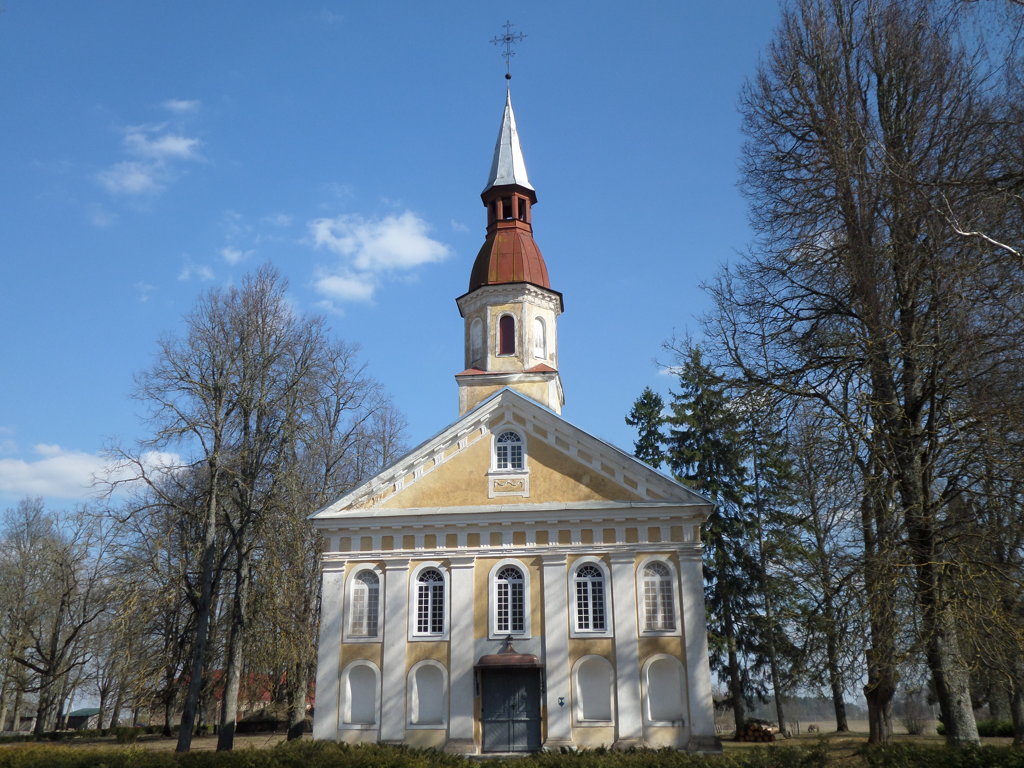 Asara first church (wood) was built in 1569, but until today nothing of it has not survived because a fire destroyed.

Manor rotmistra Ernst Christian von Holteja reign is brought nowadays visible Asare Lutheran church, which was completed in 1823, the same year the church was consecrated on August 26.
The church has a number of national importance art - Baroque pulpit with carved, pseudo-style wooden altar with a golden ornament, in the middle of the altar placed Julius Deringa painting "Christ and two angels"; E.Todes windows are decorated with stained glass workshop in 1909 produced "Nativity" and "The Ascension of Christ" with a four-Asare manor owners Coat of Arms. The organ was made in 1865 to the German organ master F.Veisborna.

Services: every second and fourth Sunday at 15:00 pm, pastor A. Bambāns 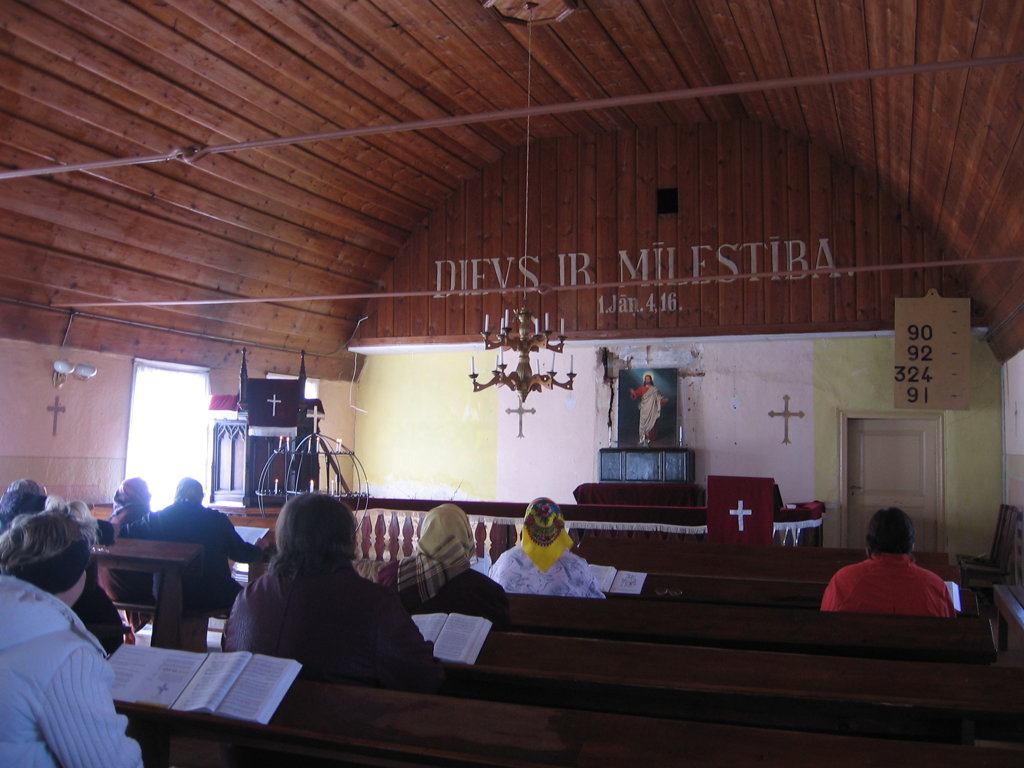 Akniste Lutheran parish church was consecrated in 1865. There are reports that the church building was originally used as a school.

The church building was built as a log house, which is covered with boards. The northern end of the building on the roof of a small decorative turret. Gallery published photographs shows the appearance of the church shortly before the 20th century, the late 80s it was coated with white silicate bricks.

Services: every second and fourth Sunday at 11:00 am, pastor A. Bambāns 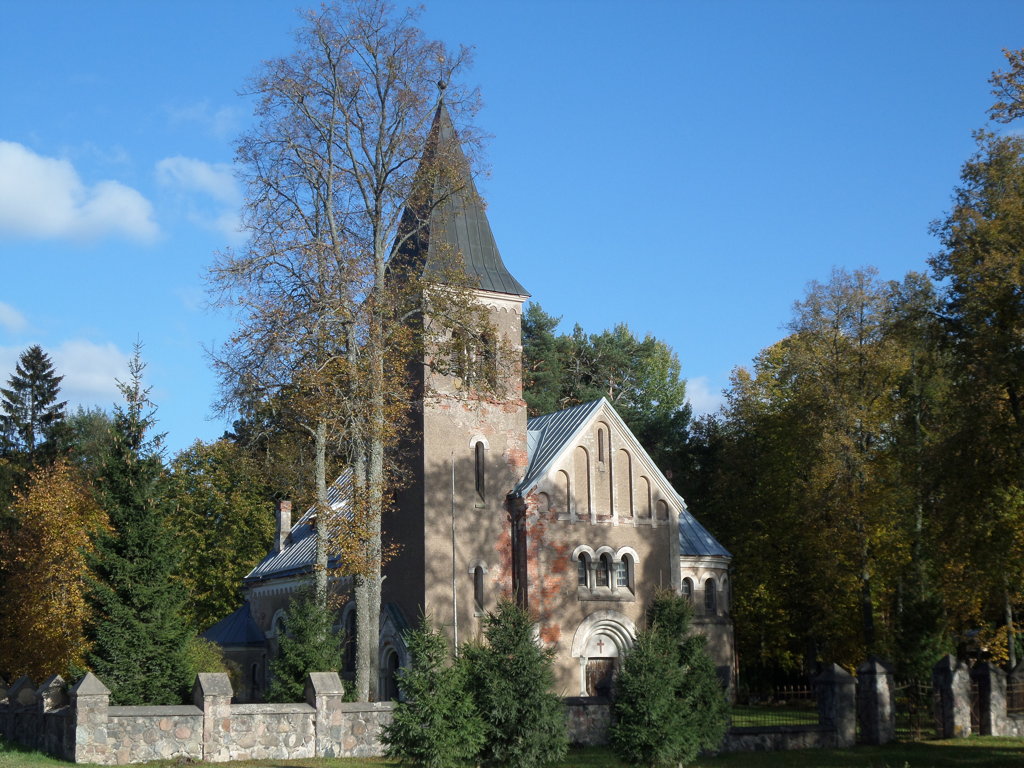 Today, the visible Lutheran church is the third church in a row that has been in Garsene. The first church mentioned in the 16th century Visiting acts - from the wooden built St. George church; the second church, which was consecrated and opened on July 5, 1792, was built of boulders. The congregation grew, had a need for more space worshipers, so boulder church demolished in 1904 to replaced by a wider, now viewable church. New Church (consecrated on October 1, 1906) is also the last Garsene Baron von Budberg tribute to his early deceased wife, an Englishwoman by nationality, Gertrude Vorsa - Budberga. Church construction, use of local building materials, led by architect Edward Kupfer.

In 1988 the church tower imposed new copper tin roof. Spire sphere into a capsule with a message for Garsene history.
1991 was carried out of the church altar parts repair (painted ceilings, walls), restored vaults inscription -  “Come to me, all you who are toiling and loaded down, and I will refresh you.”

Services: every second and fourth Sunday at 13:00 pm, pastor A. Bambāns

Next to the church - the middle of the cemetery, in classical style built chapel (1906, architect Eduard Kupfers, which is a tribute to Baron Budberg his early deceased wife Baroness Vorsa Budberga.